At this location, the proximity of the brachial plexus to the chest cavity and pleura had been of concern (Figure 2) until ultrasound (US) guidance renewed interest in the supraclavicular approach to the brachial plexus nerve block. The ability to image the plexus, rib, pleura, and subclavian artery with US has increased safety due to improved monitoring of anatomy and needle placement. Because the trunks and divisions of the brachial plexus are relatively close as they pass over the first rib, the extension and quality of anesthesia are favorable. For these reasons, the supraclavicular nerve block has become a commonly used technique for surgery of the upper limb distal to the shoulder. 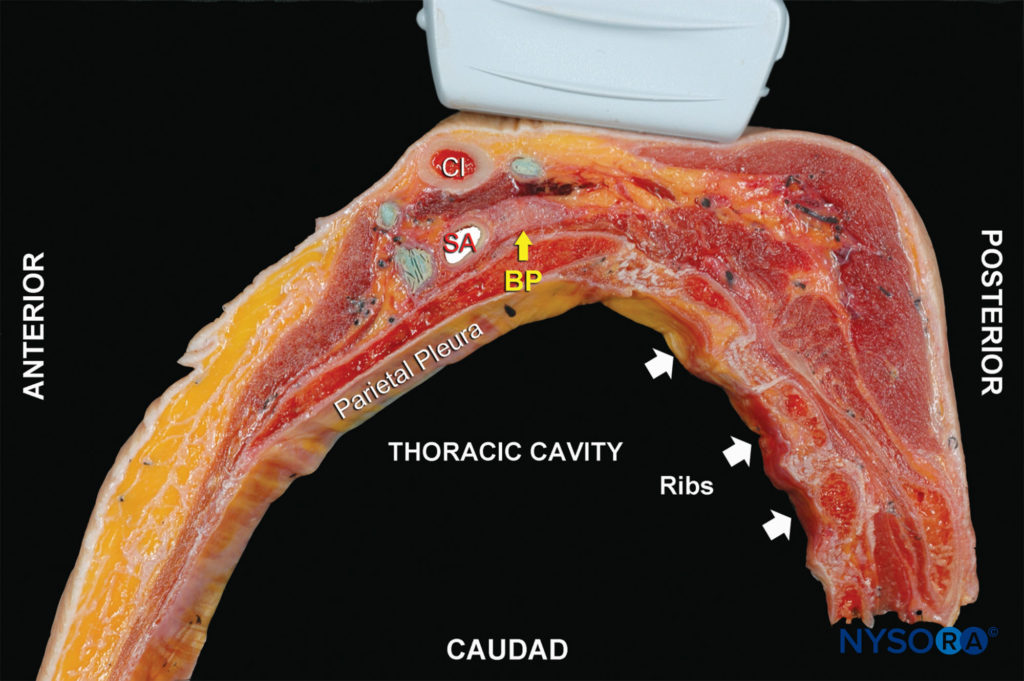 The subclavian artery crosses over the first rib between the insertions of the anterior and middle scalene muscles, posterior to the midpoint of the clavicle. The subclavian artery is readily apparent as an anechoic round structure, whereas the parietal pleura and the first rib can be seen as a linear hyperechoic structure immediately lateral and deep to the subclavian artery (Figure 3). The rib casts an acoustic shadow so that the image field deep to the rib appears anechoic.2 The brachial plexus can be seen as a bundle of hypoechoic round nodules just posterior and superficial to the artery (Figures 3 and 4). It is often possible to see the fascial sheath of the muscles surrounding the brachial plexus. Adjusting the transducer orientation, the upper, middle and lower trunks of the brachial plexus can be individually identified, as they join together at the costoclavicular space. To visualize the lower trunk, the transducer is oriented in the sagittal plane, until the first rib is seen deep to the plexus and the artery. (Figure 4). Anterior or posterior to the first rib is the hyperechoic pleura, with lung tissue deep to it. This structure can be confirmed by observing a “sliding” motion of the viscera pleura in synchrony with the patient’s respiration. The brachial plexus is typically visualized at a 1- to 2-cm depth at this location. The presence of two separate clusters of elements of the brachial plexus may be more or less obvious, sometimes with separation by a blood vessel (Figure 4). The dorsal scapular artery commonly passes through or within the vicinity of the brachial plexus. It is important to recognize that the more superficial and lateral branches come from C5–C7 (shoulder, lateral aspect of arm, and forearm) and can be tracked up to the interscalene area, whereas the deeper and more medial contingent are branches of C8 and T1 (hand and medial aspect of forearm). Adequate spread of local anesthetic in both areas is necessary for successful nerve block of the arm and hand. For additional information see Functional Regional Anesthesia Anatomy. 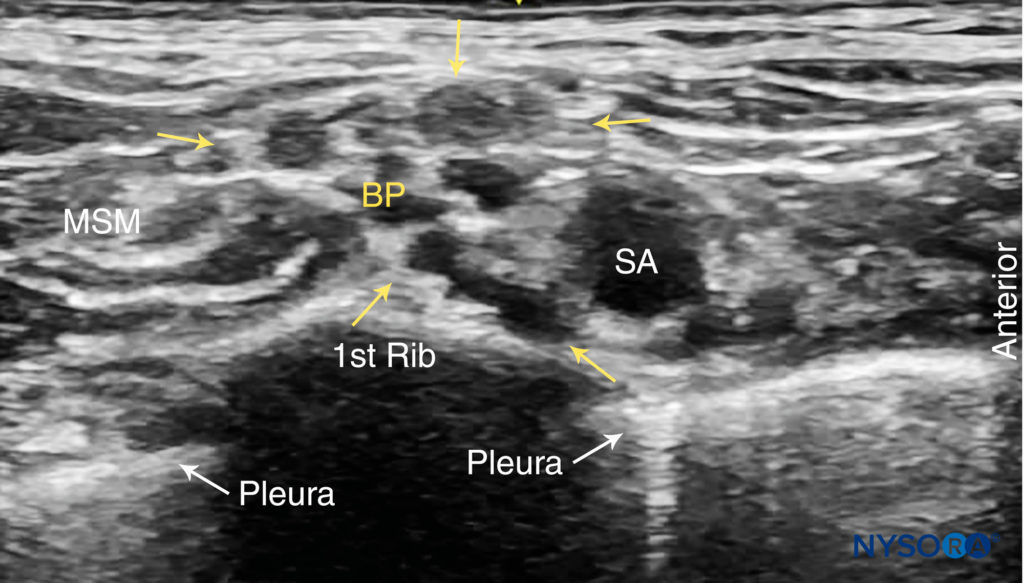 FIGURE 4. Ultrasound images of the brachial plexus cephalad to the clavicle. (A) Sagittal view: The upper (UT), Middle (MT) and lower (LT) trunks of the brachial plexus are seen posterior to the subclavian artery (SA) and superficial to the first rib. (B) Oblique view: The upper trunk (UT) is positioned between the anterior (ASM) and middle (MSM) scalene muscles. The lower trunk (LT) and the subclavian artery are superficial to the pleura.

From the Compendium of Regional Anesthesia: Cognitive priming for a supraclavicular brachial plexus block.

The supraclavicular approach to the brachial plexus block results in anesthesia of the upper limb including often the shoulder because all trunks and divisions can be anesthetized from this location. The skin of the proximal part of the medial side of the arm (intercostobrachial nerve, T2), however, is never anesthetized by any technique of the brachial plexus nerve block and, when necessary, can be blocked by an additional subcutaneous injection just distal to the axilla (Figure 1). For a more comprehensive review of the brachial plexus anatomy and distribution, see Functional Regional Anesthesia Anatomy.

Any position that allows for comfortable placement of the ultrasound transducer and needle advancement is appropriate. This nerve block can be performed with the patient in the supine, semi-sitting, or slight lateral position, with the patient’s head turned away from the side to be blocked. When possible, asking the patient to reach for the ipsilateral knee will depress the clavicle slightly and allow better access to the structures of the anterolateral neck. Knowledge of the underlying anatomy and the position of the brachial plexus in relation to the subclavian artery, first rib, and pleura is important for the success and safety of the technique. Scanning is usually started just above the clavicle, approximately at its midpoint. With the patient in the proper position, the skin is disinfected and the transducer is positioned in the transverse plane immediately proximal to the clavicle, slightly posterior to at its midpoint. The transducer is tilted caudally, as if to image the chest contents, to obtain a cross-sectional view of the subclavian artery (Figure 5). The brachial plexus is seen as a collection of hypoechoic oval structures posterior and superficial to the artery. Color Doppler should be routinely used prior to needle insertion to rule out the passage of large vessels (ie, dorsal scapular artery, transverse cervical artery, suprascapular artery) in the anticipated trajectory of the needle. FIGURE 5. Supraclavicular brachial plexus nerve block: transducer position just proximal the clavicle and needle insertion. The brachial plexus is very shallow at this location, typically 1–3 cm; therefore, inclination of the needle should be equally shallow. The image also shows the caudal tilt that is useful in obtaining best image of the plexus

• To achieve the best possible view, the transducer often must be tilted slightly inferiorly (see arrows in Figure 5). The goal is to see the subclavian artery in the transverse view and the brachial plexus just superficial and posterior to the subclavian artery, enclosed within the brachial plexus sheath. Transducer rotation clockwise often facilitate best imaging of the tissue space (sheath) containing the plexus.

Using a 25- to 27-gauge needle, 1–2 mL of local anesthetic is injected into the skin 1 cm lateral to the transducer to decrease discomfort during needle insertion. To avoid inadvertent puncture of and injection into the brachial plexus, the needle should not be initially inserted deeper than 1 cm. The distribution of local anesthetic via small-volume injections is observed as the needle advances through tissue layers (hydro-localization); small-volume injections are used to avoid inadvertent needle insertion into the brachial plexus. The nerve block needle is then inserted in plane toward the brachial plexus, in a lateral-to-medial direction (Figures 5 and 6). 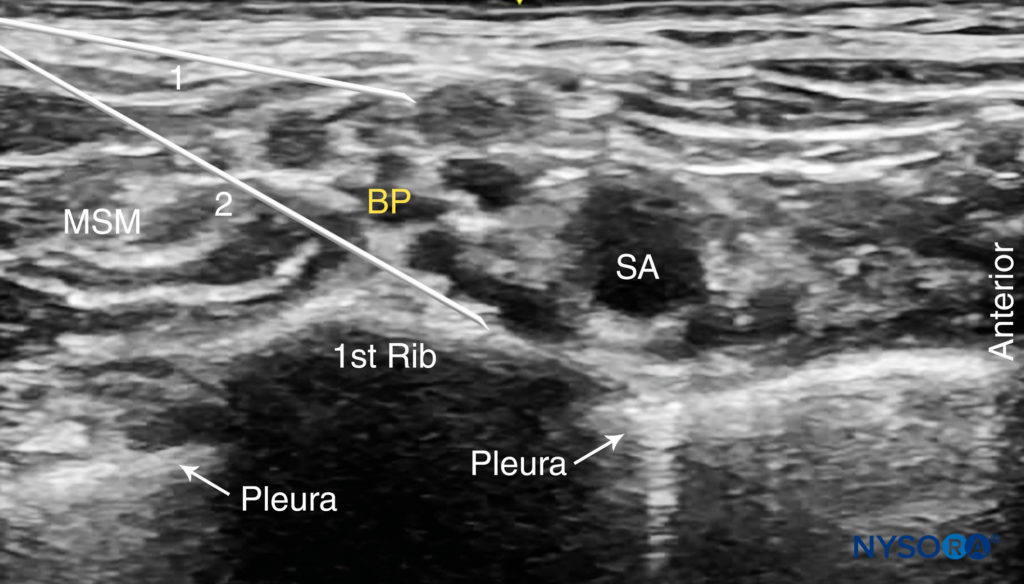 Nerve stimulation (0.5 mA, 0.1 msec), is often associated with a motor response of the arm, forearm, or hand. Note, however, that motor response may be absent despite accurate needle placement. Insertion of the needle into the sheath is often associated with a palpable “pop.” After careful aspiration, 1–2 mL of local anesthetic is injected to confirm proper needle placement. When the injection displaces the brachial plexus away from the needle, an additional advancement of the needle 1–2 mm closer to the plexus may be required to accomplish adequate local anesthetic spread (Figures 7, 8, and 9). When the injection of local anesthetic does not appear to result in a spread around the brachial plexus, needle repositioning may be necessary. Typically, 20–25 mL of local anesthetic is required for adequate nerve block. It has been suggested that lower volumes can be used in older patients. (see Figure 7). Supplementary video related to this nerve block can be found at Ultrasound-Guided Supraclavicular Brachial Plexus Nerve Block Video. 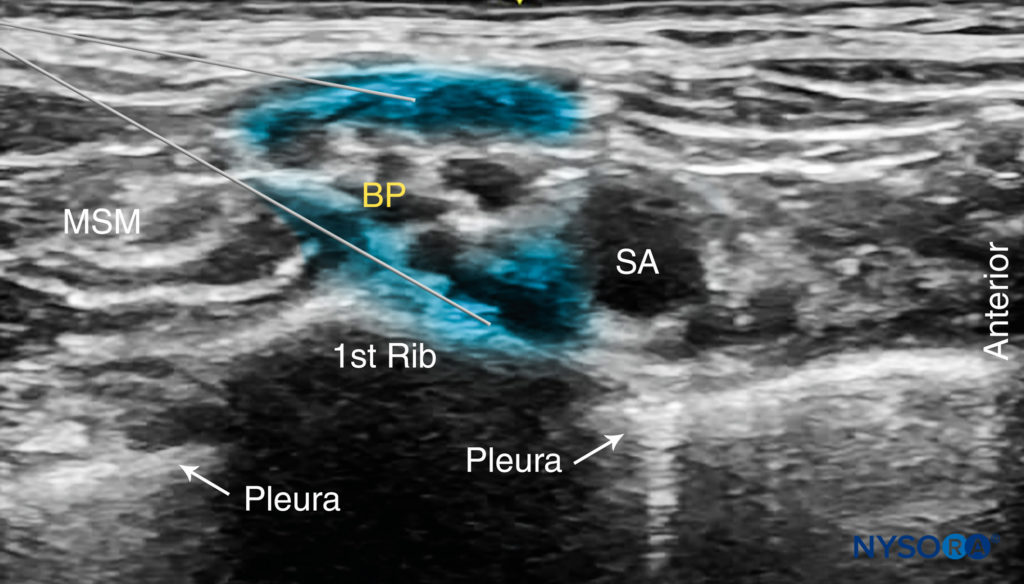 • A motor response to nerve stimulation is not necessary if the plexus, needle, and local anesthetic spread are well visualized.
• The neck is a highly vascular area, and care must be exercised to avoid needle placement or injection into the vascular structures. Of particular importance is to note the intimately located subclavian artery and dorsal scapular artery, which often cross the brachial plexus at this level. Other vessels can be found within the vicinity of the brachial plexus, such as the suprascapular artery and the transverse cervical artery. The use of color Doppler before needle placement and injection is highly recommended.
• Pneumothorax (The presence of air or gas in the cavity between the lungs and the chest wall, causing collapse of the lung) is also a rare but possible complication, typically delayed rather than immediate, therefore, it is paramount to keep the needle tip visible at all times.
• Never inject against high resistance to injection. The inability to initiate injection with an opening injection pressure of less than 15 psi may signal an intrafascicular injection.
• Multiple injections
• May increase the speed of onset and the success rate.
• May allow for a reduction in the required volume of local anesthetic.
• May carry a higher risk of nerve injury.

The ultrasound-guided continuous supraclavicular nerve block is in many ways similar to the technique used for interscalene catheter placement. The goal is to place the catheter within the vicinity of the trunks and divisions of the brachial plexus adjacent to the subclavian artery. The procedure consists of three phases: (1) needle placement; (2) catheter advancement; and (3) securing the catheter. For the first two steps of the procedure, ultrasound can be used to ensure accuracy in most patients. The needle is typically inserted in plane from the lateral-to-medial direction so that the tip is just posterior to the brachial plexus sheath. The needle is then advanced to pierce the sheath, followed by catheter placement. For additional information see Continuous Peripheral Nerve Blocks: Local Anesthetic Solutions and Infusion Strategies.

• The risk of phrenic nerve palsy is lower than with the interscalene nerve block but cannot be reliably avoided. Therefore, in patients who cannot tolerate a 27–30% decrease in respiratory function with phrenic block, an axillary or infraclavicular nerve block is a better choice of anesthesia for upper extremity surgery.

Two main disadvantages of tunneling are the risk of catheter dislodgement during the tunneling and the potential for scar formation. A number of devices are commercially available to help secure the catheter. The starting infusion regimen is typically 5-8 mL/h of 0.2% ropivacaine of bupivacaine 0.125% with 3-5 mL patient-controlled boluses hourly. A catheter-over-needle technique has also been described.

This text was a sample of content from the Compendium of Regional Anesthesia on the NYSORA LMS.