Block at a Glance

Infiltration around the sensory branches that provide innervation to the knee joint (genicular nerves) before they enter the knee capsule.

The genicular nerve block and radiofrequency ablation therapy were initially described to treat severe chronic pain of the knee. An extended version of the block technique under ultrasound (US) guidance was recently introduced to provide analgesia after knee surgery. The infiltration targets only the sensory branches to the knee joint, preserving quadriceps muscle strength. Thus, this novel analgesic technique could be used as an alternative when the femoral nerve and adductor canal blocks are not indicated or not desirable.

The first reported block of genicular nerves under fluoroscopy guidance was based on bony landmarks. The introduction of US allows for easy recognition of the same landmarks and provides additional visualization of the soft tissues and vessels needed to identify the injection site. The available data is still limited; however, case series show promising results of genicular nerve block in the perioperative setting. Clinical trials are currently ongoing to determine the efficacy of this novel technique to treat acute pain after total knee replacement.

The genicular nerves vary in number and trajectory and, because of their small size, they are not visualized with the available US technology. Genicular nerve blocks are based on US landmarks, which may result in inconsistent analgesia, particularly if a low volume of local anesthetic (LA) is used.

The proximity of the inferolateral genicular nerve (ILGN) to the common peroneal nerve (CPN) is a risk factor for unintended CPN block resulting in foot drop. Thus this nerve is spared if denervation is planned to treat chronic pain. Vascular or intraarticular punctures are other potential risks.

The innervation of the knee is complex, with branches originating from femoral, obturator, and sciatic nerves (Figure 1). The interindividual variability explains the discrepancy in the literature over the nomenclature and the origin of the genicular nerves. FIGURE 1. Innervation of the knee. The origin of the superomedial and superolateral genicular nerves (from the sciatic nerve or from the femoral nerve) is controversial.

To facilitate understanding of knee innervation, most authors divide the knee into an anterior and posterior compartment, and then further divide the anterior compartment into four quadrants. For the purpose of the technique description, the genicular nerves are called the superolateral (SLGN), superomedial (SMGN), inferolateral (ILGN), and inferomedial (IMGN) genicular nerves, which innervate primarily each corresponding quadrant. Several cadaver studies also show a contribution from other branches such as the recurrent peroneal nerve, the nerve to the vastus medialis, intermediate, lateralis, and the infrapatellar branch.

The relative position of the genicular nerves to bony landmarks at the level of the knee seems to be consistent according to the studies performed in cadavers, providing a reliable anatomic basis for an ultrasound-guided block. The US landmarks are the osteomuscular planes at the level of the metaphysis (the junction between the epiphysis and diaphysis) of the femur and tibia. Additional landmarks are the corresponding arteries, which follow the same path as the nerves and the collateral ligaments (Figure 2). 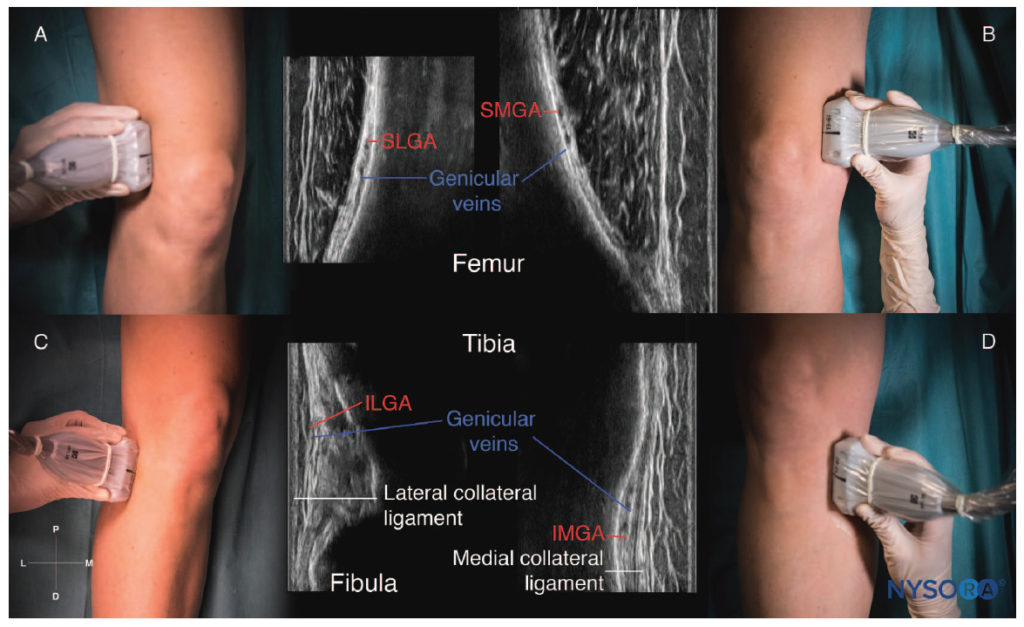 The genicular nerve block is a motor-sparing technique that anesthetizes the sensory terminal branches innervating the knee joint, resulting in anesthesia of the anterior compartment of the knee. The distribution of anesthesia of each nerve is mostly in the corresponding quadrant.

The patient is placed in a supine position with the knee slightly flexed by placing a pillow in the popliteal fossa (Figure 3). 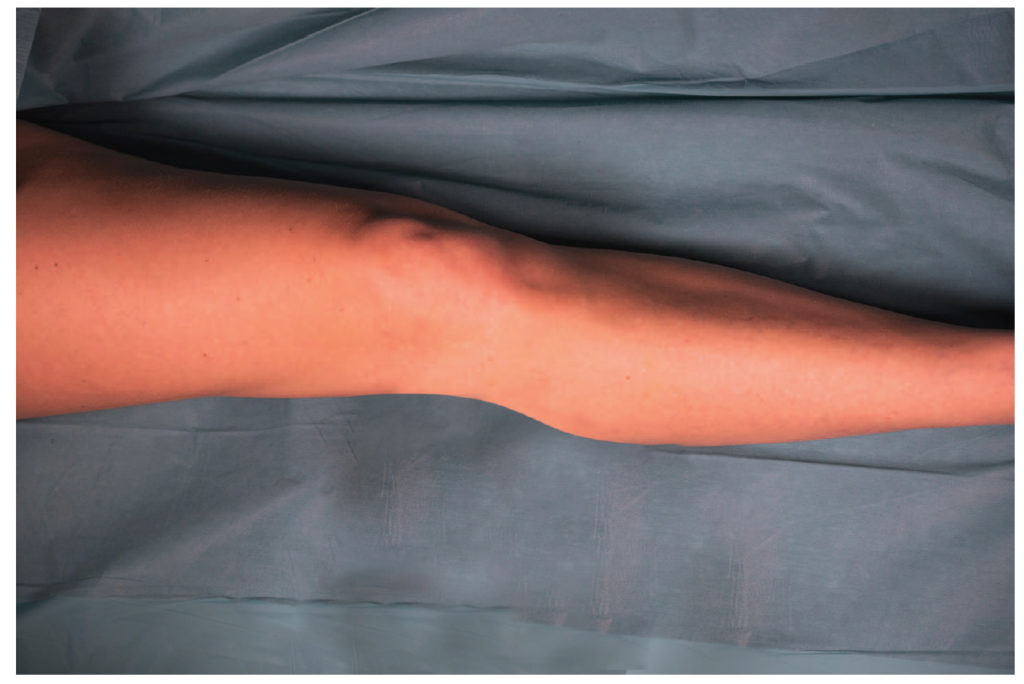 Once the injection site has been identified, the needle tip is advanced next to the vessel (if seen) until bony contact is felt using an in-plane or out-of-plane approach. Alternatively, the transducer can be rotated in a transverse orientation and the needle tip redirected toward the bone surface. After confirming the correct position, the rest of the LA is injected (Figure 4).