The ultrasound (US)-guided technique of the femoral nerve block allows the practitioner to monitor the spread of local anesthetic and needle placement and make appropriate adjustments to accomplish the desired disposition of the local anesthetic. US also may reduce the risk of femoral artery puncture. Although nerve stimulation is not required for success, motor response observed during nerve stimulation often provides contributory safety information should the needle-nerve relationship be missed by US alone.

FIGURE 1. Femoral nerve (FN) as seen distally (A) and at the femoral crease (B) Note that FN is better visualized at B, before the take off the deep artery of the thigh (DAT). Femoral vein (FV) is medial to the artery.

FIGURE 2. (A) Cross-sectional anatomy of the femoral nerve (FN) at the level of the femoral crease. The FN is seen on the surface of the iliopsoas muscle covered by fascia iliaca (white arrows). The femoral artery (FA) and femoral vein (FV) are seen enveloped within their own vascular fascial sheath created by one of the layers of fascia lata. (B) Sonoanatomy of the FN at the femoral triangle. (Reproduced with permission from Hadzic A: Hadzic’s Peripheral Nerve Blocks and Anatomy for Ultrasound-Guided Regional Anesthesia, 2nd ed. New York: McGraw-Hill, Inc.; 2011.)

From the Compendium of Regional Anesthesia: Cognitive priming for a femoral nerve block.

Femoral nerve block results in anesthesia of the anterior and medial thigh down to and including the knee, as well as a variable strip of skin on the medial leg and foot. It also innervates the hip, knee, and ankle joints (Figure 3). The equipment recommended for a femoral nerve block includes the following:

This nerve block typically is performed with the patient in the supine position, with the bed or table flattened to maximize operator access to the inguinal area. The transducer is placed transversely on the femoral crease, over the pulse of the femoral artery, and moved slowly in a lateral-to-medial direction to identify the artery.

In such cases, using a wide silk tape to retract the abdomen is a useful maneuver prior to skin preparation and scanning (Figure 4). FIGURE 4. Obesity is common in patients who present with an indication for femoral nerve block. Taping the adipose tissue away helps optimize exposure to the femoral crease in patients with morbid obesity. With the patient in the supine position, the skin over the femoral crease is disinfected and the transducer is positioned to identify the femoral artery and nerve. If the nerve is not immediately apparent lateral to the artery, tilting the transducer proximally or distally often helps to image and highlight the nerve from the iliacus muscle and the more superficial adipose tissue. In doing so, an effort should be made to identify the iliacus muscle and its fascia, as well as the fascia lata, because injection underneath a wrong fascial sheath may result in nerve block failure. Once the femoral nerve is identified, a skin wheal of local anesthetic is made 1 cm away from the lateral edge of the transducer. The needle is inserted in-plane in a lateral to medial orientation and advanced toward the femoral nerve (Figure 5). FIGURE 5. Transducer position and needle insertion using an in-plane technique to nerve block the femoral nerve at the femoral crease.

If nerve stimulation is used (0.5 mA, 0.1 msec), the passage of the needle through the fascia iliaca and contact of the needle tip with the femoral nerve usually is associated with a motor response of the quadriceps muscle group. In addition, a needle passage through the fascia iliaca is often felt. Once the needle tip is adjacent (either above, below, or lateral) to the nerve (Figure 6), and after careful aspiration, 1–2 mL of local anesthetic is injected to confirm proper needle placement (Figures 7 and 8). Proper injection will push the femoral nerve away from the injection.

Additional needle repositions and injections are done only when necessary. Anatomic variations have been described with aberrant positions of the femoral nerve. In an adult patient, 10–15 mL of local anesthetic is adequate for a successful nerve block. The goal of the continuous femoral nerve block is the placement of the catheter within the vicinity of the femoral nerve just deep to the fascia iliaca. The procedure consists of five steps: (1) needle placement; (2) injection through the needle to confirm needle placement in the proper tissue plane; (3) catheter advancement; (4) injection through the catheter to assure its therapeutic position; (5) securing the catheter. For the first two phases of the procedure, US can be used to ensure accuracy in most patients. The in-line approach from the lateral-to-medial direction is the most common method because the out-of-plane approach holds greater risk for puncture of the femoral nerve if the needle is introduced directly above the nerve (Figure 9). Alternative approaches, such as the oblique approach, have also been suggested. FIGURE 9. Continuous femoral nerve block. The needle is seen inserted in plane approaching the nerve in a lateral-to-medial direction. Although it would seem intuitive that a longitudinal needle insertion would have advantages, the technique demonstrated here is simpler and commonly used. The catheter should be inserted 2–4 cm past the needle tip.

In general, the inguinal area is quite mobile, and the femoral nerve is shallow, both of which predispose to catheter dislodgment. The more lateral the starting point for needle insertion for continuous femoral nerve block, the longer the catheter would be within the iliacus muscle, which may help prevent dislodgment because muscle tends to stabilize a catheter better than adipose tissue. A common empirical infusion regimen for femoral nerve block in an adult patient is ropivacaine 0.2% at an infusion rate of 5 mL/h with a 5 mL/h patient-controlled bolus.
Read more about Ultrasound-Guided Adductor Canal Nerve Block
Supplementary video related to this block can be found at Ultrasound-Guided Femoral Nerve Block Video

This text was a sample of content from the Compendium of Regional Anesthesia on the NYSORA LMS. 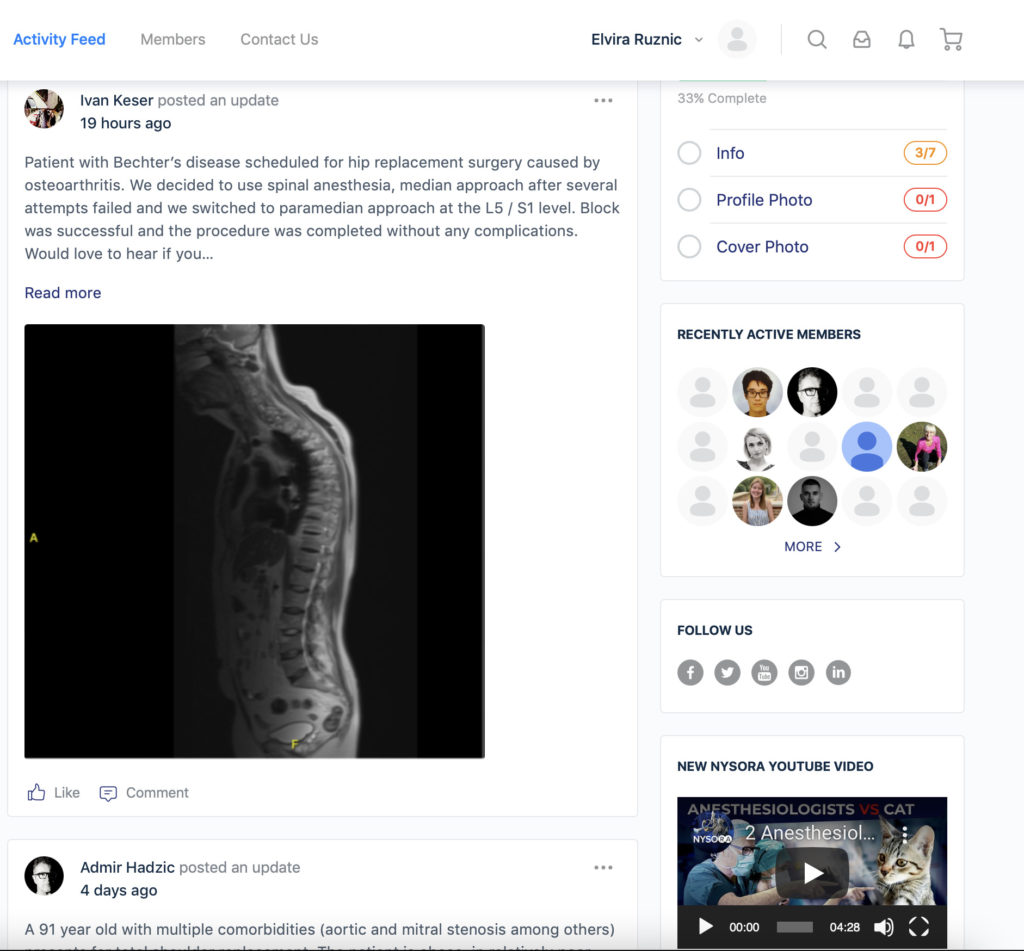