Cervical plexus anesthesia was developed early in the 20th century with two main approaches being used. In 1912, Kappis described a posterior approach to the cervical and brachial plexus, which attempted to block the nerves at their point of emergence from the vertebral column. The posterior approach was advocated because the vertebral artery and vein lie anterior to the plexus. However, the needle must pass through the extensor muscles of the neck which causes considerable discomfort, and the long path of the needle is more hazardous. Consequently, this technique is not recommended as a routine for cervical or brachial plexus block.

Deep and superficial cervical plexus blocks can be used in a variety of surgical procedures, including superficial surgery on the neck and shoulders and thyroid surgery. Its use is most common in carotid endarterectomy, in which an awake patient self-monitors to ensure adequate cerebral blood flow during cross-clamping of the carotid artery (Figure 1). Since the description of the first carotid endarterectomy in 1954 by Eastcott, the number of these operations has been growing annually. Regional anesthesia is a viable anesthetic choice for carotid surgery, although debate continues whether it improves patient outcomes. The largest randomized trial to date on this topic (GALA trial) showed no difference in 30-day stroke or mortality rates, a conclusion that has been supported by a recent meta-analysis. Figure 1. Carotid endarterectomy. The image shows open, cross-clamped carotid artery and a plaque inside its wall.

The superficial cervical plexus block can be used for many superficial surgeries in the neck area, including lymph node dissection, excision of thyroglossal or branchial cleft cysts, carotid endarterectomy, and vascular access surgery.

Comparisons of superficial vs deep cervical plexus blocks for carotid endarterectomy have either shown equivalence or favored the superficial block due to the lower risk of complications.

Although both the deep and superficial cervical plexus blocks can be performed separately, they have been used by some also in combination for anesthesia and postoperative analgesia for head and neck surgery.

Contraindications to performing a cervical plexus block include patient refusal, local infection, and previous surgery or radiation therapy to the neck. Likewise, due to the risk of phrenic nerve paresis, the deep cervical plexus block is relatively contraindicated in patients with contralateral phrenic nerve palsy and significant pulmonary compromise. Figure 2. Anatomy of the cervical plexus.

The dorsal and ventral roots combine to form spinal nerves as they exit through the intervertebral foramen. The first cervical root is primarily a motor nerve and is of little interest for locoregional anesthesia. The anterior rami of the second through fourth cervical nerves form the cervical plexus. The branches of the superficial cervical plexus innervate the skin and superficial structures of the head, neck, and shoulder (Figure 3). The branches of the deep cervical plexus innervate the deeper structures of the neck, including the muscles of the anterior neck and the diaphragm, which is innervated by the phrenic nerve. The third and fourth cervical nerves send a branch to the spinal accessory nerve, or directly into the deep surface of the trapezius to supply sensory fibers to this muscle. The fourth cervical nerve may send a branch downward to join the fifth cervical nerve and participate in the formation of the brachial plexus.

Figure 3.. Innervation of the head and neck

The cutaneous innervation of both the deep and superficial cervical plexus blocks includes the skin of the anterolateral neck and the anteauricular and retroauricular areas (Figure 3). To read more about the cervical plexus distribution, see Functional Regional Anesthesia Anatomy.

The following three landmarks for a deep cervical plexus block are identified and marked (Figure 4): Figure 4. Anatomic landmarks for the cervical plexus. Shown are estimates of the transverse processes C2-C3-C4-C5-C6. Figure 5. Palpation of the transverse process of C6.

The transverse process of C6 is usually easily palpated behind the clavicular head of the sternocleidomastoid muscle at the level just below the cricoid cartilage (Figure 6). Next, a line is drawn connecting the MP to the Chassaignac tubercle. Position the palpating hand just behind the posterior border of the sternocleidomastoid muscle. Once this line is drawn, label the insertion sites over the C2, C3, and C4, which are respectively located on the MP–C6 line 2 cm, 4 cm, and 6 cm, respectively, caudal to the mastoid process. 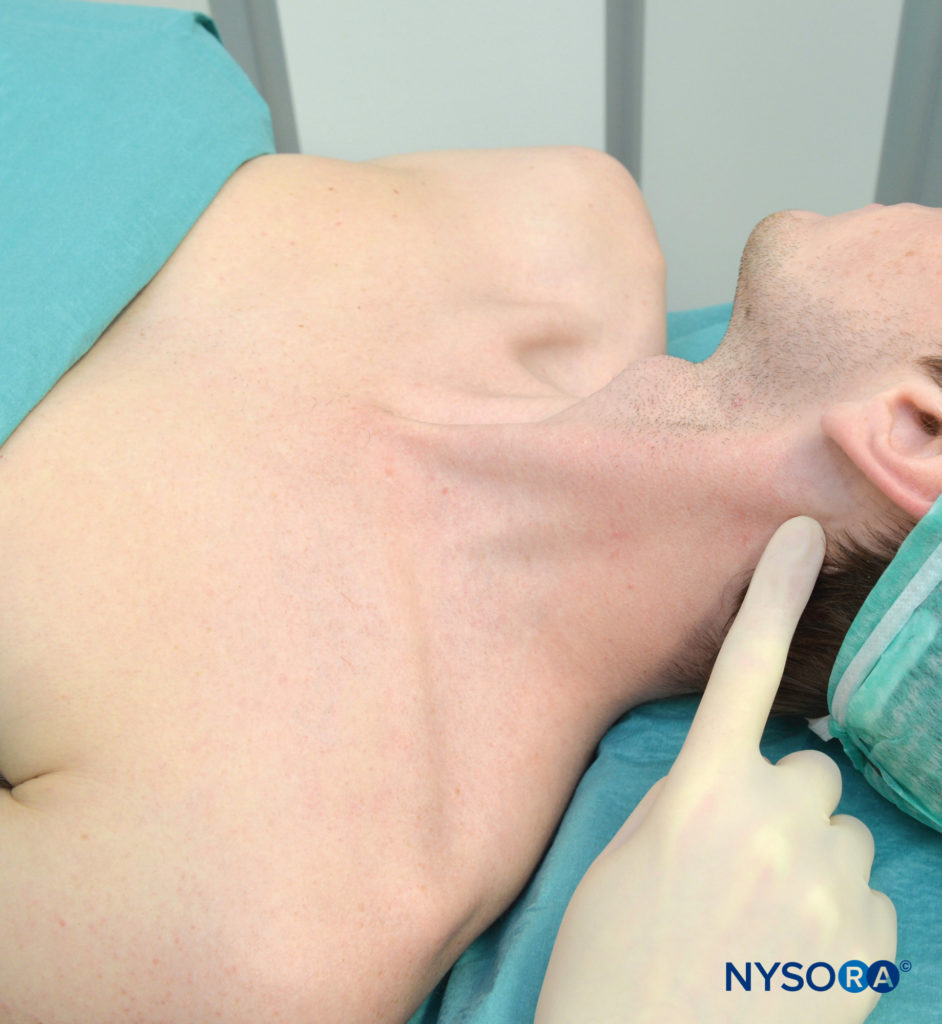 Figure 6. Palpation of the mastoid process.

It is also possible to perform a single injection at the C3 level, which is considered safe and effective.

A deep cervical plexus block requires 3–5 mL of local anesthetic per level to ensure a reliable block. Except perhaps with patients with significant respiratory disease who rely on their phrenic nerve to adequately ventilate, most patients benefit from the use of a long-acting local anesthetic. Table 1 shows commonly used local anesthetics with onset and duration of anesthesia and analgesia for deep cervical plexus blocks. Ropivacaine 0.5% provides a good quality block of longer duration, and it is one of most common choices for carotid endarterectomy surgery. 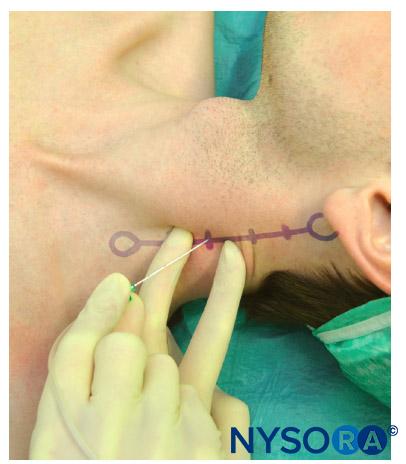 Although the placement of deep cervical block may be uncomfortable for the patient, excessive sedation should be avoided. During surgery, airway management may be difficult due to the close proximity of the surgical field. Surgeries like carotid endarterectomy require that the patient be cooperative for intraoperative neurologic assessment. Excessive sedation and the consequent lack of patient cooperation can lead to restlessness and patient movement intraoperatively.

The onset time for this block is 10–15 min. The first sign of onset is decreased sensation in the distribution of the respective components of the cervical plexus. It should be noted that due to the complex arrangement of the neuronal coverage of the various layers in the neck area as well as cross coverage from the contralateral side, the anesthesia achieved with cervical plexus block is often incomplete, and its use often requires a knowledgeable surgeon who is skilled in supplementing the block with local anesthetic as necessary.

A line extending from the mastoid process to C6 is drawn as described above (Figure 8). The site of needle insertion is marked at the midpoint of this line. This is where the branches of the superficial cervical plexus emerge from behind the posterior border of the sternocleidomastoid muscle. Figure 8. Supraclavicular nerve block. An initial injection of 3 mL local anesthetic is deposited at the midpoint of the sternocleidomastoid muscle, followed by 7 mL injected subcutaneously in a caudad and cephalad direction along the posterior border of the muscle.

Superficial cervical plexus block requires 10–15 mL of local anesthetic (3–5 mL per each redirection/injection). Since a motor block is not sought with this technique a lower concentration of long-acting local anesthetic is most often used (e.g, 0.2–0.5% ropivacaine or 0.25% bupivacaine). Higher concentration, however, may result in both a greater success rate and a longer duration of block. Table 1 shows the choices of local anesthesia, with onset time and duration of anesthesia and analgesia.

Anatomic landmarks and the needle insertion point are marked as described above. After cleansing the skin with an antiseptic solution, a skin wheal is raised at the site of needle insertion using a 25-gauge needle. Using a “fan” technique with superior-inferior needle redirections, the local anesthetic is injected alongside the posterior border of the sternocleidomastoid muscle 2–3 cm below and then above the needle insertion site. The goal is to achieve block of all four major branches of the superficial cervical plexus.

The goal of the injection is to infiltrate the local anesthetic subcutaneously and behind the sternocleidomastoid muscle. Deep needle insertion should be avoided (e.g., >1–2 cm).

The superficial cervical plexus block is associated with minor patient discomfort, so little or no sedation should be required.

Ultrasound guidance can also be used when performing the superficial cervical plexus block, although studies to date have not demonstrated an advantage over a landmark-based technique.

COMPLICATIONS AND HOW TO AVOID THEM

Complications can occur with both deep and superficial cervical plexus blocks (Table 2). Infection, hematoma formation, phrenic nerve block, local anesthetic toxicity, nerve injury, and inadvertent subarachnoid or epidural anesthesia can all occur when performing these blocks. In a large prospective study of 1000 blocks for carotid artery surgery, Davies and colleagues reported only 6 blocks (0.6%) showing evidence of intravascular injection. Other possible complications include transient ischemic attacks either during surgery or in the postoperative period and recurrent laryngeal nerve block. As with other nerve blocks, the risk of complications can be decreased by meticulous technique and attention to detail.

TABLE 2. Complications of cervical plexus block and means to avoid them.