Dr. Hadzic will discuss the differences among the: (1) lumbar plexus block, (2) fascia iliaca block, (3) femoral triangle block, and (4) adductor canal block, because trainees and attendees to NYSORA workshops sometimes tend to be completely confused as to what each one of these blocks does.

The lumbar plexus derives its branches or origins from the spinal segments of L1 through L5 and is a rather large entity. But, in essence, the most important three nerves are the femoral nerve, which is the biggest nerve of the lumbar plexus, the lateral femoral cutaneous nerve of the thigh, and the obturator nerve. Dr. Hadzic demonstrates the three nerves important for lumbar plexus block for the lower extremity, which are: femoral, lateral femoral cutaneous, and the obturator nerve. Dr. Hadzic showing the roots of the lumbar plexus. Dr. Hadzic demonstrates where the local anesthetic should be administered to block all three nerves. Dr. Hadzic explains the alternative approach to the lumbar plexus block through the fascia iliaca. Dr. Hadzic explains the alternative approach to the lumbar plexus block through the fascia iliaca.

And here’s how that works; shown below on the far right is the anatomy that we just reviewed with all the three main branches of the lumbar plexus. Also shown is the injection of the methylene blue underneath the fascia iliaca, and you can see the blue dye or methylene blue substantial distribution underneath the fascia iliaca to block these three branches of the lumbar plexus (femoral, lateral femoral cutaneous, and the obturator nerve). The injection of the methylene blue underneath the fascia iliaca. Femoral nerve below the inguinal ligament. Different block sites as the femoral nerve can be blocked anywhere on its path. 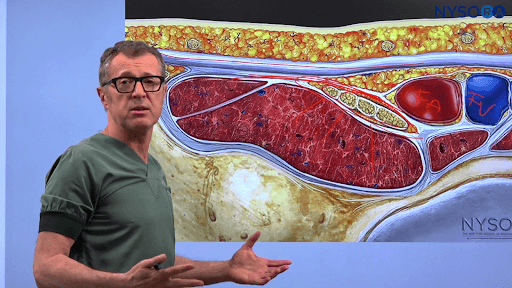 Variants of the femoral nerve block, from proximal to distal. So far we have talked about the femoral nerve block, the femoral triangle block, and the adductor canal block. But if we descend lower down to the knee, and shown below is a patient who is having ruptured patellar repair, here you can inject local anesthetic to anesthetize the tissue for the patellar repair and it could be used as an analgesic, or even complete anesthetic if you will. But again, what’s really interesting is if you inject the local anesthetic around the knee for the quantitative standard repair, what we are really doing is blocking the terminal branches of the femoral nerve, because the anesthesia for this operation can be accomplished in any one of these locations, including the fascia iliaca and the lumbar plexus. Of course, the more distal you go, the more specific you will be. The choice of technique here usually being femoral nerve block, because it also causes relaxation of the quadriceps muscle, which then facilitates repair of the quadriceps tendon.

In summary, what we discussed is that the femoral nerve is a continuation of the same nerve from the pelvis all the way down to its terminal branches at the knee, and you have a chance to block it in various different locations alongside its path. While the femoral nerve gives off branches for the musculature proximally, it gives off branches for the sensory innervation more distally. Therefore, the more distal block of the femoral nerve that you perform, the more likely you are going to avoid the motor effect or motor weakness and promote ambulation, whereas the more proximal you do that, you’re going to get a great extent of analgesia, but at the same time you will get some motor weakness which may impair the ambulation. Dr. Hadzic summarizes the different levels at which a femoral nerve block can be achieved.

So the choice at which level you want to do the femoral nerve block from here to there really depends on what you want to accomplish. The choice that you need to make is between the analgesia, which is best with the proximal approaches, and the modus pairing which is best with the distal approaches. Usually, a good compromise for the femoral nerve block for the total knee replacement in our practice is actually femoral triangle block, because the femoral triangle block will block most of the branches that we are interested in for total knee replacement pain management, but at the same time it spares the bulk of the muscles of the anterior thigh.